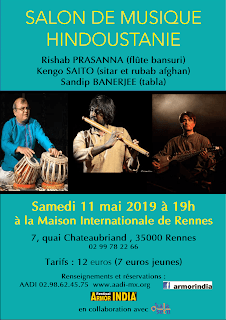 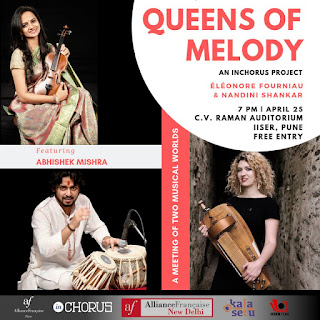 "From Kurdish songs to Hindustani ragas", here you are the musical journey proposed by Kalasetu and the Alliance française of Delhi for the next InChorus project "The Queens of Melody" with Eléonore Fourniau (vocal and hurdy-gurdy), Nandini Shankar (violin) and Abhishek Mishra (tabla).

Few dates all over India to discover these wonderful musicians.

For the 11th performance of [InChorus], two gems of music will meet on stage and marry their exquisite styles of singing and ﬁddle playing: the French singer and hurdy-gurdy player Éléonore Fourniau who performs the pains and joys of the Kurdish people with stunning sensitivity and the Indian violinist Nandini Shankar who interprets the ragas of Hindustani music in the gayaki ang (vocal style) with great subtlety. Their repertoires are known for the highly reﬁned treatment of microtones and the delicate musical ornamentations. They will be accompanied by the talented tabla player Abhishek Mishra who will add his touch by creating rhythms in his brilliant style. This concert is an invitation to immerse ourselves in the timeless melodies of the vast lands of Kurdistan and India: a pure bliss to expect!

Opened to all - Free entry

Presentation of the artists

After an adolescence in Ouzbekistan, Éléonore Fourniau left her native France for Turkey to learn Turkish and Kurdish musical styles and chants. She learnt saz in the conservatory of Istanbul and in the school of Erdal Erzincan where she met numerous masters. With her saz and her hurdy-gurdy, a medieval instrument that she brings subtly into Oriental music, she sings the traditional repertoire of Turkish popular music with great passion. Appreciated for her technique and her crystalline voice, Eleonore is recognized as a brilliant interpret of the Kurdish repertory and is touring now all over the world as a soloist as well as singer in different ensembles.

Nandini Shankar is one of the talented daughters of the violin maestro Dr. Sangeeta Shankar: she began her training in music from the tender age of 3 under the tutelage of her mother and illustrious grandmother, Padmabhushan Dr. N. Rajam. Being born and brought up in a musical atmosphere, she started her career as a violinist at an early age. Nandini is presently one of the promising figure of Indian Classical music. She has been the recipient of Cultural Scholarship awarded by Ministry of Culture and has also received ‘Jashn-e-Youngistan’ from the Vice-President of India in 2018. In parallel of her music career, she is a Faculty member at Whistling Woods International, a premier film institute in Mumbai.

Born in a family of musicians, Abhishek Mishra is one of the young gifted tabla players from the Benaras style of playing. Son of Pt. Birendra Nath Mishra, he has started to learn tabla at an early age with his grandfather, Pt. Surendra Mohan Mishra, before getting the guidance of Pt. Pooran Maharaj and Pt. Kumar Bose. Abhishek is currently an A grade artist from All India Radio & Doordarshan and he is regularly accompanying senior Hindustani artists in renowned music festivals. 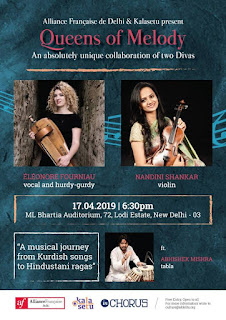 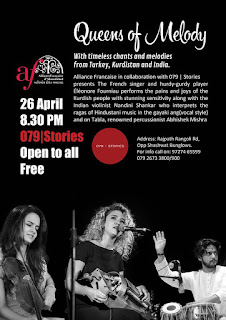 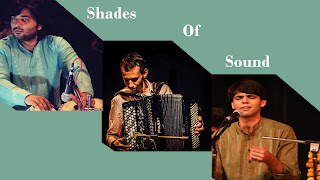 
For the 10th edition of In[Chorus], Kalasetu and the Alliance française of Delhi have welcomed three artists : the Parisian accordionist Noe Clerc, the Hindustani vocalist Ujwal Nagar and the percussionist Zaheen Khan.

Accordion is an emblematic instrument of the French music tradition: unique in its sound, versatile in its style, it is also close to the Indian harmonium. Marrying the rich sonority of virtuoso Noé Clerc with the tuneful voice of Indian classical vocalist Ujwal Nagar can only be a beautiful union ! Accompanied on tabla by Zaheen Khan, this trio promises to be a rare, interesting and ear blowing experience. It will also be a stimulating exchange between Western and Indian classical tradition.


Ujwal Nagar is a promising young Hindustani classical vocalist from Delhi. He received his initial training in Classical music from his mother, Guru Urmila Nagar, a Kathak and Hindustani music exponent. He has also received intensive training from Late Ustad Bashir Ahmad Khan of Sikar and is also taking guidance from Pandit Sriram Umdekar and Pandit Somnath Mardur. He is a recipient of Sahitya Kala Parishad and Central Government Scholarships. He is also doing his Ph.D in Hindustani classical music. Ujwal’s ongoing collaborative work with the group ‘Advaita’ as a lead classical singer has been greatly appreciated by classical music connoisseurs.


Noé Clerc is a multi-faceted accordionist. Student of Draomirah Hejna before joining the Conservatory of Toulouse to learn Western classical and Contemporary music in parallel of jazz. He is currently following the classes of Max Bonnay and learning improved music and jazz in the department of Ricardo del Fra, in the Conservatory of Paris (CNSMDP). In 2017, he has created Noé Clerc Trio with drummer and percusionnist Elie Martin-Charrière, double bass player Clément Daldosso. Together they create an elegant music with various influences.

Zaheen Khan is a promising tabla player from the Ajrada school of playing. Born in a family of musicians, he has started the practice of tabla at an early age with his maternal grand-father, the famous Ustad Hashmat Ali Khan. Now, he is under the guidance of his maternal uncle, the tabla maestro Ustad Akram Khan.


*****
[InChorus] is a cycle of musical meetings organized by the Alliance Française de Delhi and the cultural association Kalasetu for the promotion of South Asian traditional Performing Arts and exchanges between Indian and French artists. [InChorus] offers a platform for creation dedicated to young promising musicians, of all genres, settled in India and in France through residencies, concerts and workshops. They encourage talented Indian musicians to take part in the development of a musical project or to strengthen an already existing collaboration with a Francophone artist.

Four dates to discover this creation : 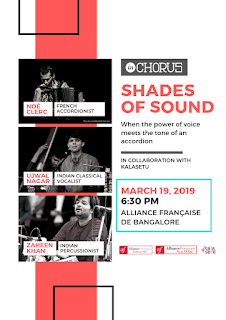 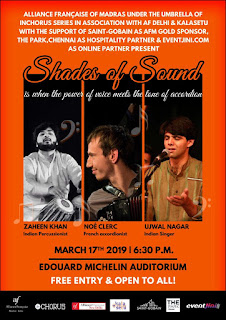