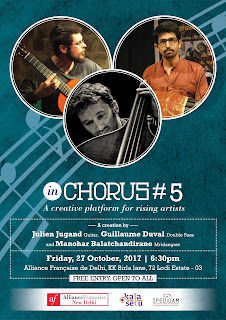 Passionate about various forms of music, Julien Jugand and Guillaume Duval met at University where they both studied ethnomusicology and conducted researches that have greatly influenced their musical play: a friendly, poetic and inspired duet traveling from western classical, jazz, and Latin-American repertoires. Their collaboration with the versatile mridangam player Manohar Balatchandirane is unique and promise creative surprises and new textures of sound and resonance.

Guillaume Duval is a self-taught musician born in Paris, France. He started with electric bass performing afro-american music such as blues, funk and soul then progressively turned to double bass. He studied jazz and traditional music from Eastern Europe and West Africa and collaborated to several projects (gipsy jazz, swing, folk song, spoken word, african music,...). He studied ethnomusicology, and went to Mali for a research about hunter music. This period had a great influence on his playing and gave him strong keys to approaching other musical concepts.


Julien Jugand is a French guitarist trained in classical music and South-american music under the guidance of maestros such as Arnaud Dumond, Rafael Andia and Jacques Marmoud. Playing and arranging folk and pop music, he also works as a sound engineer and as an electronic music composer, while teaching popular music history and technologies of music in Dieppe's national school of music.

Manohar Balantchandirane started performing at a very young age under the guidance of his teacher, Mridanga Selvam Kumbakonam Shri N. Padmanaban. He accompanied various artists across India and abroad both in music and dance performances. Recognized as one of the finest upcoming mridangam player in the capital today, Manohar is also a singer, trained in Carnatic music. His knowledge in both Hindustani and Carnatic traditions is rare enough to be mentioned and allows him to develop a lot of collaboration beyond traditional styles. 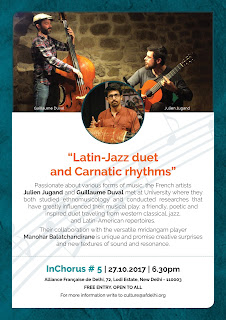