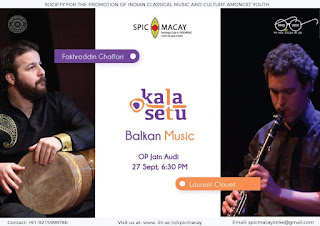 In order to promote the knowledge of European and World's traditional music in India, Kalasetu is collaborating again with Spic Macay (the Society for the Promotion of Indian Classical Music And Culture Amongst Youth) for two lecture demonstrations around Balkan music with the French clarinet player Laurent Clouet and the Iranian percussionist Fakhroddin Ghaffari.
The first lec-dem will happen in Lal Bahadur Shastri National Academy of Administration (LBSNAA) in Mussoorie on 26th, the second in IIT-Roorkee on 27th September.


Laurent is a French clarinet player who has learnt music from the Balkan (Southeast Europe) with great masters such as Selim Sesler (Turkey), Petar Voinikov (Bulgaria) and Manos Achalinotopoulos (Greece). Through his travels and meetings with musicians from various backgrounds in Europe and Asia, he has developed a great sense of improvisation and knowledge of many different musical forms.


Kurdish-Iranian percussionist Fakhroddin Ghaffari has mastery over several Persian and Middle Eastern percussion instruments including his main instrument, the Iranian Tombak, as well as the Egyptian Darbuka, the Kurdish Daf and the Turkish Doumbek. Fakhroddin has lived in India for the past 13 years performing and collaborating with top musicians from throughout India. He has shared the stage with artists such as Abida Parveen and Hansraj Hans.

SPIC MACAY is a non-political nationwide voluntary movement that organises programmes of classical music and dance, folk arts, crafts, yog, classic cinema screenings, heritage walks, etc. inside school and college campuses throughout the world to make students more aware about Indian and world heritage. This initiative makes education more holistic and meaningful as it highlights all that is abstract, subtle, inspiring and mystical in the world teaching one to look within oneself. SPIC MACAY runs on the energy of volunteers who come from all walks of life - students, teachers, housewives, professional and retired people, young and old." (spicmacay.com). 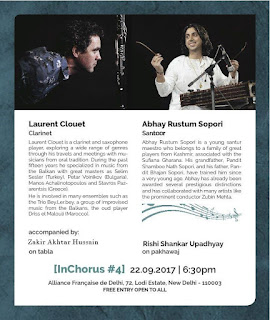 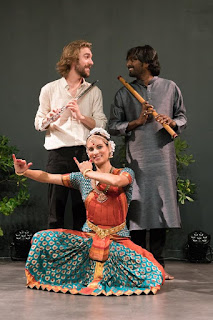