Launch on December 3, 2016
6.30 PM at auditorium of Alliance Francaise 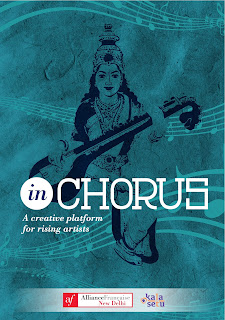 [InChorus] is a cycle of musical meetings organised by the Alliance Française de Delhi and the Kalasetu organization for the promotion of South Asian traditional Performing Arts and exchanges between Indian and French artists.
[InChorus] offers a platform for creation dedicated to young promising musicians, of all genres, settled in India and France through residencies, concerts and workshops. We encourage talented Indian musicians to take part in the development of a musical project or to strengthen an already existing collaboration with a French (or European) artist.
[InChorus] invites the musicians to display their work during a public performance in the auditorium of Alliance Française de Delhi. The first part of the programme will be dedicated to the Indian artist, followed, in the second part, by a restitution of his collaboration with his French counterpart.

Kalasetu is an indo-french organization established by musicians and anthropologists passionate about Indian Performing Arts. Kalasetu aims to bring together artists, scholars and a large audience to appreciate and encourage the transmission and the performance of artistic expressions from South Asia, in India and in France.